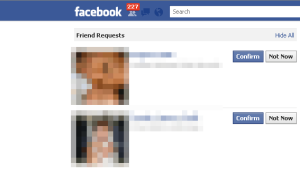 Imagine that? You log on to Facebook for a harmless gander at what your friends are up to, because you definitely haven’t checked for at least 10 minutes, and there in blue and white is a friend request from Gordon Brown…

Okay, so that will probably never happen. Unless of course you just so happen to have an unfortunate friend who shares the same name. But there is talk of more Government involvement in our online dealings, which could mean that they would know what we are all up to on our beloved social networking sites. I wonder if I could be pulled up on stalking charges for following Brad Pitt’s tweets all too closely.

In a proposal last year, The Home Office requested to have access to people’s social networking information (both the information they post and any movements they make within the site) as part of an Intercept Modernisation Programme, which also included monitoring people’s telephone calls and e-mails. With approximately 17 million British people using Facebook, and a further 10 million people choosing Bebo, the government would have copious amounts of information on us mere mortals.

In a recent survey conducted by the BBC, the public were asked whether they felt the government should be monitoring our internet usage. 55% of people in the UK believed that there was a case for some government regulation. So it seems that half the population feel that there may be some positives in having the government monitoring our internet, and with the continual rise in internet related crime, it’s hardly surprising people feel that something needs to be done.

The Government are looking to introduce the Digital Economy Bill which would see the Government implement a ‘three strikes’ rule for users on the internet. This would obviously mean more monitoring on internet usage and would definitely crack down on crimes like illegal file sharing, and will also monitor the amount of explicit content that can be found on the net. Somewhat more importantly, it will surely make the internet safer for the rest of us- with previous offenders not being able to use chat rooms and networking sites to find new targets. So perhaps it’s not too bad an idea having Alan Johnson trawling the internet to see who has ‘poked’ who…

Furthermore, the Digital Economy Bill would see the whole of the UK decked out with Broadband by 2012, meaning that everybody would have access to the internet. This comes as the BBC poll concluded that 79% of people believed that access to the internet is fundamental human right. The United Nations are looking to get proper legislation to protect internet access as a human right implemented on a global scale.

We are a generation who have become somewhat dependant on the internet, which is not necessarily a bad thing. The internet has made information more accessible on a larger scale and has meant that communication is quicker than ever. We shop on the internet, whether it’s for clothing or even food shopping. We e-mail everybody; be it tutors, prospective employers or family. We even use it for our academic study- what would we do without Wikipedia or Spark notes? If our access to the internet was ever revoked we would feel like we had been catapulted back to the dark ages, and I for one, would feel a little bit lost. I already find myself getting angered when I find myself in some obscure location without a wi-fi connection, as if some divine being is trying to taunt me.

So it would seem the implications of legislation deeming internet access as a human right are quite impressive, it would mean that everybody’s online access is protected. It boils down then to this. Perhaps, just maybe, the Government have got something right here. We may moan that Brown, or his successor, could see that we have visited the cute guy from our seminars page a stalkerish amount of times but realistically, if we have done nothing wrong, then we should have nothing to fear. And quite frankly, if it means the internet being a safer place to surf then I might just have to accept that friend request.

Error: Twitter did not respond. Please wait a few minutes and refresh this page.

the blog of Seldom Seen Photography

an Irish nerd's eye look at the world of film